Duck and Hippo: Lost and Found 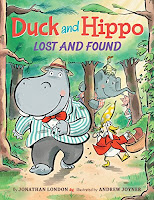 "Excuse me," Hippo said, "but I can't celebrate! I forgot to bring something to share for the picnic!"

Wanting to throw a fete to celebrate the end of summer, Duck and Hippo head to the pond where they will meet their friends. Duck is carrying a plethora of deliciousness while Hippo looks resplendent in a blue striped jacket, red bow tie, and hat. Their friends, Elephant, Pig, and Turtle, come with more food and drink. Before eating, the buddies prance about with Elephant squirting water, Duck dancing with a bright yellow umbrella, and Pig spinning on Turtle's shell. By studying the artwork, readers will see that Hippo is not nearly as jovial. But why? There always seems to be someone at a party who has forgotten to bring something. Hippo feels terrible. Duck reassures him that it's not a problem, but Hippo is inconsolable. So he sets off into the woods to find a contribution to the picnic. His friends plan on waiting until he returns. Time passes and Hippo doesn't return. The hungry companions search in the woods and yell for their friend. He doesn't return the call as he is fixated on finding berries. Dusk turns to night. Duck is very worried about her friend. Still shouting in the dark, the friends are startled when Hippo finally replies. Relief is felt all around and Hippo lifts his hat to reveal a surprise.

With bright artwork and a winning duo, Duck and Hippo exudes joy. You can't help but be happy as you're reading it. This is a terrific text for exploring the theme of friendship. And you're always working on friendship in a K-2 class. With young readers, it's also good for working on prediction. When Hippo says "Wait!", I would stop the book, cover the text on the opposite page, and ask students what they think is the approaching problem. Speaking of problems, if your class wants to discuss how problems drive a story, this would be a nice text for that discussion. Duck and Hippo are a pair that primary readers will look forward to seeing again and again.