You Can Fly: The Tuskegee Airmen

You Can Fly is a thunderous set of second person poems that celebrate the courage and contributions of a mighty military force. The Tuskegee Airmen had to fight battles on two fronts. Started in 1941, this squadron chased Axis flyers in Europe and made a significant contribution to the Allied effort. Here are some stats from the poem Your Record:

1500 combat missions
Knocked out one enemy destroyer, 262 German planes, and 950 vehicles.
Out of 205 missions, 200 were flown without losing a bomber
Lee Archer Jr. was an ace, having shot down four enemy planes
Over 900 medals won including Distinguished Crosses, Bronze Stars, and Purple Hearts

In addition to fighting in the air, on the ground these brave soldiers had to deal with a different enemy: racism. The poem Anxious details this by describing how ropes separated black and white soldiers traveling across the Atlantic on their way to battle. In The Other War, soldiers know not to stray far from base as they would encounter bigotry in many forms including lynching.

Through the use of poetry, Carole Boston Weatherford brings the fight of the airmen on both fronts right to the reader. Anger, heartbreak, and pride are some of the emotions that will come forth as you read about what these men and women went through to serve their country. Equally powerful are the scratchboard illustrations by Jeffery Boston Weatherford. On page 65 is a poster featuring a black and white worker together with the title United We Win. Many compelling conversations will arise after viewing this poster. 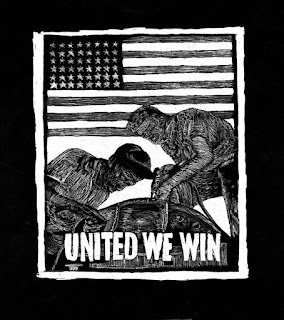 Upper elementary, middle, and high school teachers should use You Can Fly as a mentor text in their poetry and World War II units. Poetry is a powerful tool of expression and has great potential as a way to personalize history. You Can Fly allows an important piece of history to soar again.

The maps in this book are a little different. They show the borders of the major biomes of the world.

This is a way cool idea. Instead of dividing a map politically (by country), the creator of Animal Atlas divide by biomes. These are the geographic areas that are divided not by borders but by the flora and fauna that live there. Each of the seven continents are represented. For example, North America is not divided by Canada, the United States, Mexico, the Caribbean, and the countries of Central America. Instead, we have the tundra in the far north where we find polar bears and walruses. It is bordered on the south by the taiga region. Here you find an abundance of trees, along with black bears, wolverines, and spotted salamanders. Most of the United States and Mexico is divided between the desert, grasslands, and temperate forest biomes. Tropical rainforest is the predominate biome for Central America and the Caribbean. Each biome in each continent is represented by summaries and beautiful photographs of some of the animals that live there. In the marine biome of Australia, you'll find saltwater crocodiles, giant clams, whale sharks, and reef fish. Also present are green sea turtles though none seem to come with a surfer accent. These summaries would be a great jumping off point for creating graphic organizers like tables and charts. Another nice aspect of Animal Atlas are the ROAR boxes. These boxes teach readers about ways humans are trying to improve the life of animals. One box details the positive news about how swallowtail butterflies are making a comeback in the British Isles.

Animal Atlas is a terrific way to introduce the concept of biomes to young readers. I would like to see a companion book that focused on the flora in each of these biomes. Chock full of photographs and fun animal facts and priced like a hardcover picture book, Animal Atlas clocks in at 94 pages which is a great deal. This would be an interesting way to teach knowledge of the continents and other map skills.

Here is a link to some terrific resources in a downloadable curriculum guide. Check it out!
Posted by Jeff Barger at 9:35 PM No comments:

RIF (Reading Is Fundamental) has partnered with Ustyme to give away e-books. Participating families can access 50 free books. Click on this link to learn more.
Posted by Jeff Barger at 9:46 PM No comments:

What Could It Be?

What Could It Be?
written and illustrated by Sally Fawcett
2016 (EK Books)
Source: Review copy provided by the publisher


You're an ambitious parent. You want your child to learn their colors and shapes so they can secure that Ivy League acceptance letter in twelve years. Wandering through a store, you eyeball a set of flash cards with shapes. A little practice each day and before long your little one will be able to explain the Pythagorean theorem. Fight the urge to pick up that pack of lifeless cards. You can do much better than that. Instead, find a copy of What Could It Be? and have a good bedtime math read. Written by a teacher, this charming picture book is an interactive search for shapes in the real world. Illustrated with vivid colors, What Could It Be? features seven shapes. Each shape is introduced with the opposite page asking "What else could it be?". The first two page spread has sparse illustrations to set up the reader for the blast of hues that come in the second two page spread. For example, after drawing a circle, a child looks at a snail trailing away from a bowl of fruit and asks "What else could it be?" Turn the page, and a gorgeous garden appears with circles abounding in many places. The reader is encouraged to find different colored circles. Squares are featured in a grandmother's living room and triangles in a snowy mountain scene. Placing the shapes in familiar settings encourages children to make connections in their world. They will probably be looking for shapes around them before they even finish the book.

In a preK - 1st grade classroom, you could have a shape hunt after reading What Could It Be? Inspired by the back cover, your students could use watercolors to paint a picture featuring a particular shape. The author, being a teacher, has provided a ton of resources on this page including teacher notes and several art activities. Students can upload their illustrations to this website as well. Sally Fawcett deserves a round (or square) of applause for this fine effort.
Posted by Jeff Barger at 7:42 PM 4 comments:

The Thank You Book: Elephant and Piggie Call It a Day

Speaking directly to, otherwise acknowledging or doing something to the audience through this imaginary wall – or, in film, television, and video games, through a camera – is known as "breaking the fourth wall".
- Wikipedia

One of the great duos of children's literature has said farewell. After nine years and twenty-five books, Gerald the Elephant and Piggie have called it a day. This delightful duo goes out in style. Piggie decides that she has a lot to be thankful for. In order to show her gratitude, she is going to thank everyone who is important to her. What follows is a thanking of a wide list of animals from large (Hippo's Big Sister, Whale) to small (Flies). Even a special guest from another book series (think wannabe bus driver) makes an appearance. The problem is that Piggie, as Gerald predicted earlier, left out an important someone. It takes a few clues, and a little anger, but finally Piggie remembers who and it's not Gerald. A satisfying end to a classic series.

I'm intrigued when characters directly talk to the reader or viewer. Two examples that come to mind are Garry Shandling and Ferris Bueller. Gerald and Piggie also break the fourth wall in order to say something special to neatly tie up this series. This really isn't goodbye, because these two will continue to be loved and read by generations of early readers.
Posted by Jeff Barger at 9:43 PM 1 comment: 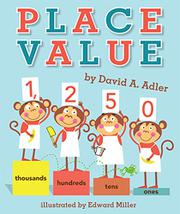 We write numbers with digits. There are ten digits in our number system.

The monkeys at the Banana Cafe have a massive challenge. Using recipe 5,432, they have to create a colossal banana cupcake. Colossal, as in needing 2,426,782 bananas. When you're making a dessert the size of Mount Rushmore, you will need a good sense of place value. Digits have values depending on where they are placed. 4,5, and 6 can be 456 or 646. That makes a big difference. The monkeys know that digits are grouped in threes with commas separating those groupings. This allows them to have groupings of hundreds, thousands, and millions. Going to pay for all of the ingredients that go into a gargantuan pastry? You will need to know decimals, but with the help of the place value charts that are on each spread, the intrepid simians are top bananas.

If you want to help students learn, one effective strategy is to make comparisons. By comparing place value to the arrangement of letters in a word (cafe as opposed to face), David Adler will make these concepts stick. The humorous illustrations will also help the knowledge go in deeper. I can see placing (I see what I did there.) these charts under a document camera and modeling how to write large numbers. I think challenging students to find a replacement for the monkeys (elephants in a peanut factory?) would be a fun activity as well. Place value is a huge deal in primary classrooms, so don't monkey around (couldn't help it) and find a copy of Place Value.
Posted by Jeff Barger at 10:44 PM No comments:

Apologies and My Third Book 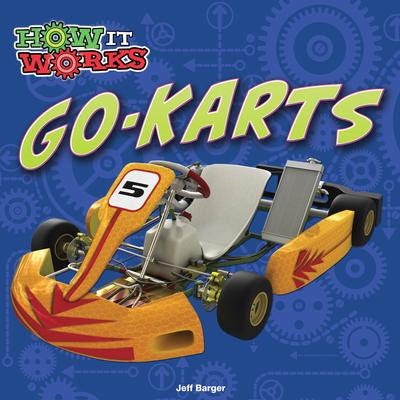 I want to apologize for not blogging lately. I have been neck deep in other projects and haven't found the time to blog for the last couple of weeks. I will try to change that soon.

My third book is arriving on August 1st according to this website. Trying to explain how engines work to an audience of 6-8 year old readers was challenging. I hope I did a good job!
Posted by Jeff Barger at 1:10 PM 2 comments: