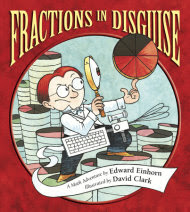 George Cornelius Factor lives for fractions. He collects them and places them on shelves in his home. So it's no surprise that when a 5/9 is available through an auction, George is there to bid. Others want this prize fraction as well, so the bidding is fast and furious. George makes the initial bid and is topped by Madame Geometrique and Baron von Mathematik. As the bidding reaches a peak, the room is thrown into darkness. When the lights come back on, the valued 5/9 is gone and so is the mysterious Dr. Brok, who has a shady past. George suspects the bad doctor and immediately starts thinking of a plan. Using parts of a ray gun, a calculator, paper clips, a whisk, and spare computer parts, he develops a Reducer. When pointed at a fraction, it reduces it to its lowest terms. George tries it out on a 10/15. He is able to reduce it to a 2/3. Now it is time to implement the second part of the plan. He goes to the mansion of Dr. Brok. Will he find the precious 5/9? I've given you 1/2 the plot so you can find out what happens in the other 4/8.

Fractions In Disguise is 6/6 a clever tale. Students will have fun trying to reduce fractions as they read the book. It's a great way to introduce reducing fractions, which starts in the fourth grade math curriculum. Adding this math mystery to your math read aloud collection will be one whole good idea!
Posted by Jeff Barger at 10:25 AM