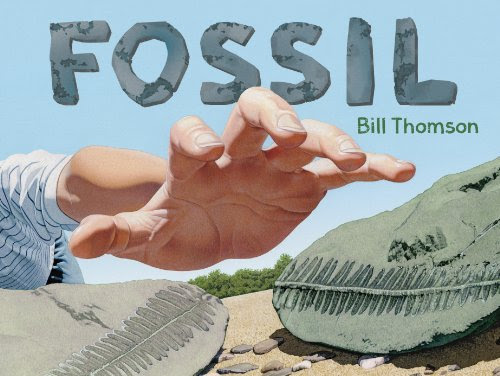 *** Leave a comment in the comments section and you will be eligible to win a copy of Fossil! I'll announce the winner by Saturday, 11/17.

A boy wearing a baseball cap walks along a shoreline. His dog sniffs out a rock and he picks it up. Something interesting is on the underside of the rock. Tripping over a limb, the boy accidentally throws the rock in the air. The rock lands on a larger rock and breaks apart. What is revealed is an imprint of a fern from long ago. In front of the boy's eyes, an actual fern appears. His dog sniffs out another rock. The boy breaks open this rock and sees the imprint of a dragonfly. Suddenly, he is buzzed by a dragonfly. His dog gives chase and this leads to an even larger rock. With his curiosity at an all time high, why wouldn't the boy open this rock too? Third time is a charm, right? In this case, it's trouble. The fossil is of a claw that belongs to a pteranodon. As the prehistoric creature tracks the boy, the dog decides to hop on its back for a ride. Now the boy has to figure out how to get his dog back and get rid of the pteranodon.

Chalk, Bill Thomson's 2010 wordless treasure, is one of my favorite books that I have blogged about during the 4 year history of NC Teacher Stuff. Many other bloggers had a similar affection for the book, so the pressure was on for Thomson with this second book in a planned wordless trilogy. Fossil does not disappoint. The illustrations are magnificent. They are not computer generated, but hand drawn. You can check out several of them right here. I recently finished a unit in my classroom on how to use illustrations to draw meaning from the text. Fossil would be a great mentor text in this regard. Wordless texts also make the reader think a little differently, which is a good thing. Students have to work harder to gain meaning since they can't use words. Other ideas on how to use Fossil are available in a classroom guide and a kid's activity guide.

If you want a good lesson on how writers come up with story ideas, check out Bill's blog post about the inspiration for Fossil. See the video below for a cute review by several kids.