Nonfiction Monday: What Was the Battle of Gettysburg?

** This may be the latest ever post for Nonfiction Monday. I've been out of town and involved in professional development sessions so time has been at a premium.

My family surprised me for Father's Day. They blindfolded me and took me away in the car. When I got to take off the makeshift mask, I found out that I was on my way to Gettysburg. If you love history, this is close to hallowed ground for you. Central Pennsylvania is a beautiful part of the world. The photo below is one I took in the soldier's cemetery. This year is the 150th anniversary of the battle so plenty of special events are taking place as part of the commemoration of what took place from July 1st - July 3rd in 1863. 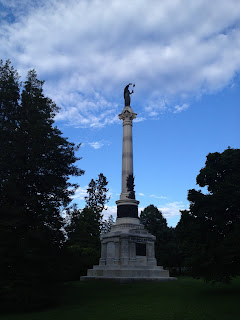 If you can't make it to Gettysburg, or need a primer before you go, What Was the Battle of Gettysburg?, would be a good book to read. The first section explains why the United States was at war with itself in the first place. I like how Jim O'Connor is able to offer an explanation that has enough details for the reader to understand, but not so many that a young reader will be bogged down. O'Connor has a good sense of who will be the audience. The next section is about how the war came to Gettysburg. Confederate general Robert E. Lee wanted to strike into Northern territory so as to draw away Union troops that were winning victories in the Confederacy. Gettysburg is a town that has been compared to a wagon wheel with the many roads as the spokes.
Each day is given its own section. Critical decisions are featured in each day with the culminating event being Pickett's Charge on July 3rd. Gettysburg is a place of courage, controversy, and heartbreaking tragedy. The author illuminates this with the revelation that his grandfather's uncle fought and died in this battle. A letter from this soldier is included in the back matter.

If you have students who love history and military events, this would be an excellent resource for you. The text is easy to digest, yet you get a full picture of why this is such an important event in American history. One of the understandings that you come away with after reading this book is that it would not have taken much for this battle to have switched victors and therefore change the course of where we are right now.