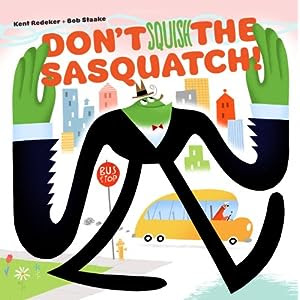 I wasn't going to pass up a book with this cover. Mr. Sasquatch asks bus driver Mr. Blobule, who is an orange-red blob as opposed to Michael Buble, if he can ride the bus. Sasquatch goes to the back of the bus so he can stretch out his legs and not be squished. Next, Miss Elephant Shark asks to ride the bus. Mr. Blobule agrees as long as she follows this admonition, "Don't Squish the Sasquatch!". Of course it goes unheeded and our protagonist is squished. Mr. Octo-Rhino is the next stop and he boards the bus with the same plea from the bus driver. Further squishing ensues and the rhino with eight legs finds his seat. Two more  creatures follow and create such claustrophobic conditions that chaos ensues. With the bus in tatters due to overcrowding, Mr. Blobule has the solution to the Sasquatch's hurt body and feelings.

Don't Squish the Sasquatch! would be a great text to use when teaching about feelings. I think explicitly teaching young children about helping their friends when they suffer is an excellent idea and this book is a humorous way to teach this. You can also use it to teach alliteration. Bob Staake's illustrations are terrific as usual and made me think about creating a craft/writing activity where students created their own monster combo and wrote about it. I'm going with Mr. Shark-Eagle.
Posted by Jeff Barger at 10:55 PM