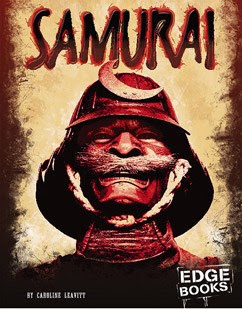 Check out Nonfiction Monday at Check It Out

For those like myself who have little knowledge of samurai history, what comes to your mind first when you hear "samurai"? War? Battle? Sword fighting? All of these are definitely associated with the samurai. How about poetry? What? Yes, poetry. Samurai would write poems about the possibility of being killed. They would also tend gardens to clear their minds of the violence that permeated their occupation. These are some of the interesting facts that you will find in Samurai. Landowners called daimyo controlled the small states that made up the Japan of one thousand years ago. To protect their property, they hired warriors called samurai. Either you were born into a samurai family or you defeated a samurai to gain this title. It was in 1591 that the shogun limited access to those who were of the same class. Rewards for being a samurai included homes, land, and money. Not all samurai were fighters. Some helped run the government. Those who did fight either rode a horse or fought on foot. Samurai lived by a code called "bushido". This created absolute loyalty to their master and a disciplined life. These warriors were known for keeping their word. Unfortunately, Emperor Mutsuhito went back on his word to the samurai in mid-19th century Japan and created a national army that effectively ended the need for samurais.

Samurai would be a great book for reluctant readers in the upper grades. Caroline Leavitt includes so many interesting facts and anecdotes about the history of these warriors. The photographs and illustrations are terrific as well. You could ask students to contrast these ancient soldiers to the soldiers of today. Artistic readers could create a labeled diagram of the armor that samurais wore.