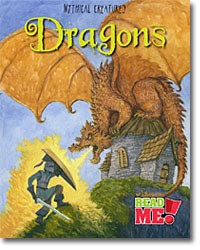 Check out Nonfiction Monday at The Children's War

With the popularity of the How to Train Your Dragon books and movie, a nonfiction look at the history of dragons would be a timely resource to have in your classroom. Author Charlotte Guillain examines the history behind dragon myths around the world and discusses modern day animals that are dragon-like. For example, in Babylon there were myths about a scaly dragon called the sirrush which had back legs like an eagle. The dragon god Chac appears in Central American literature. This dragon would exchange the water he controlled for gifts from the people.

Dragons is a rare early reader nonfiction text about this subject that will engage young dragon enthusiasts. There are several nonfiction text features (labels, maps, bulleted lists, glossary, index) if you wanted to use this book in that manner. If you are working with older reluctant readers, you can extend the discussion into other "monster myths" that exist around the world. You can also take out individual paragraphs and teach main idea and supporting details. My one question about this subject is the use of the word dragon in ancient texts. It would be interesting to research if the word was applied to existing animals of that time period with a different meaning than we currently have for the term dragon.
Posted by Jeff Barger at 9:34 AM