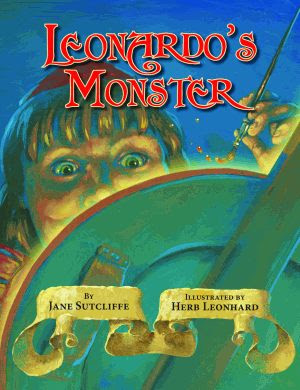 In Vinci, Italy lived a young man named Leonardo who seemed to be good at everything he tried. His greatest talent was drawing. He was so good that his art teacher quit painting. One day, a worker for Leonardo's father brought a shield that he had made from the stump of a fig tree. The man wanted to find a painter to paint his shield. Naturally, Leonardo's father selected his son to fulfill this request. After reshaping the crooked shield, young Leonardo decided to draw a monster on it. He started by researching creatures in the forest and bringing some of them back to his room so he could study further. This created a terrible smell, but Leonardo was so consumed with the task that he ignored it. Finally he completed his painting of the shield and the results were so astonishing that his father was frightened when he saw it for the first time. After regaining his wits, Leonardo's father made a decision that adds a final twist to the story.

Leonardo's Monster could be used as an introduction to the genre of historical fiction. Students could discuss which parts of the book are fact and which sections might have been created by the author. Author Jane Sutcliffe repeats the phrase "pretty unusual" in the book. Students could use this to think about the theme of the book and the author's purpose for writing it. The whereabouts of the shield are unknown, so a good writing prompt would be to ask students to write about what they would do if they found this shield. Leonardo's Monster is an entertaining insight into the early life of a famous figure in history.
Posted by Jeff Barger at 10:30 PM