Secret of the Puking Penguins ...and More! 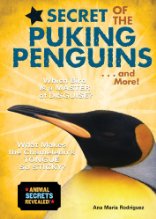 Ana Maria Rodriguez had me at puking penguins. How could you not like this title? Rodriguez delivers five fascinating nonfiction tales of scientists revealing secrets of the animal world. The first article is about discovering the secret of the gripping power of a chameleon's tongue.  I really like the procedural text that is included with this article.  My favorite selection is the second one which deals with the black spots on an alligator's face.  Scientist Daphne Soares learns how these spots act as sensors.  The title selection, Secret of the Puking Penguins Revealed, explains how male king penguins can keep food in their stomachs for weeks at a time. Chapter 4 reveals the cuckoo bird as a master of disguise, but not visually as expected. The last selection is about the iridescence of a peacock's feathers and how those colors come into being.

Each article is a terrific read that illustrates how the scientific method works. Secret of the Puking Penguins could be used to teach how to use text features such as context clues, footnotes, inferential subheadings, glossaries, and diagrams. Nonfiction fans will devour this title.
Posted by Jeff Barger at 10:16 PM