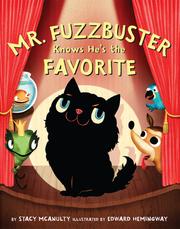 Who wouldn't want to have a copy of Mr. Fuzzbuster??? All you have to do to be eligible is to retweet me on Twitter (@ncteacherstuff) or if you don't tweet, reply in the comments section below. I will pick one winner from my social media accounts (Blogger, Facebook, Twitter) combined. I will contact our one winner tomorrow. In case you missed it, here is my review from before.

Mr. Fuzzbuster knew he was Lily's favorite. They'd been together since he fit in a teacup and she fit in diapers.
There are two dogs and two cats in our house. We often place them in rank order depending on their behavior. If the beagle chews a rug, she gets ranked #4 or even lower if a fly has entered the house. If a cat manages to make it through the day without depositing a hairball, he might be the "pet with the most potential." These rankings affect absolutely nothing, but it's a fun conversation to have. At Lily's house, Mr. Fuzzbuster knows who's the pet with the most potential. It's him. With all of the activities (napping, dress up, eating meals together) they do together and his seniority, Mr. Fuzzbuster has to be the one. Who's the competition? A bird, a dog, a fish, and a lizard are also vying for Lily's attention. Holding a Lily-drawn old portrait of him like it's the Magna Carta, Mr. Fuzzbuster feels very confident of his place in the pecking order. To apply the coup de grace, he writes a note asking Lily to name her favorite pet. She reads the note and declares Fishy Face her favorite goldfish, but not her favorite pet. That designation probably saves him from becoming an hors d'oeuvre for Monsieur Fuzzy Face. Feathers the bird is declared her favorite bird and King the lizard is her favorite lizard. Surely, Mr. Fuzzbuster is going to be anointed the favorite pet. Nope. He is simply her favorite cat. With only the dog left, the forlorn feline packs his bags and starts heading out the door before he has to hear Bruiser the dog anointed with his crown. What he hears next stops him in his tracks.Mr. Fuzzbuster is going to be a favorite in primary classrooms. Why? It's funny. His self-centered world is highly amusing. The artwork, especially Mr. Fuzzbuster's facial expressions, will entertain. But there are two sneaky things going on here. First, it's a picture book treatise on love and devotion. Why do we care for others? This book could easily jump start a discussion on that subject which is needed since it is an important facet of a classroom. Second, there's a final twist on the last page which may draw the biggest laughs. With all of these ingredients, it's become a favorite of mine as well.

Email ThisBlogThis!Share to TwitterShare to FacebookShare to Pinterest
Labels: 2017, giveaway