Jazz Day: The Making of a Famous Photograph

Lucky I was home from the road
Lucky I was free until two
It's jam now or never, brethren
This moment won't happen again

It was an idea that most people would have pooh-poohed right off the bat. Fortunately, Esquire magazine didn't. Art Kane, who worked for an advertising agency in 1958, wanted to put together as many jazz musicians as he could for a photograph. He found the perfect spot in Harlem and set a date and time. Notices were sent out to the musician's union, nightclubs, and anyone else who would have a connection to jazz. Kane wondered who would show on August 12th. After all, jazz musicians weren't morning people. But fifty-seven artists, famous (Thelonious Monk, Dizzy Gillespie, Count Basie)  and relatively unknown, came for the once-in-a lifetime event. Jazz Day focuses on the event and its participants with twenty-one mostly free verse poems and illustrations that are as cool as the other side of the pillow. History can be presented in a manner as dry as toast, but these poems bring to life a uniquely American art form. How to use it in a classroom? Glad you asked. First, you can use several of these poems to show how you can beef up nonfiction with poetry. Instead of a three or four paragraph report written on index cards, try writing a free verse poem about an historical figure. Stand out from the crowd like these musicians did. Second, read a poem from the book like Names, which is about Count Basie, and play a YouTube video that shows his orchestra playing. Ask students, "How is this music the same and how is it different from music that you listen to?" Finally, create your own Jazz Day book. Take a photograph in front of your school and have students write a poem about a classmate to make a book. Highlight the extensive research that Roxane Orgill underwent for this book as you encourage students to interview their classmates in preparation for writing their poem. That's a book they will keep for the rest of their lives. Below is the famous photograph: 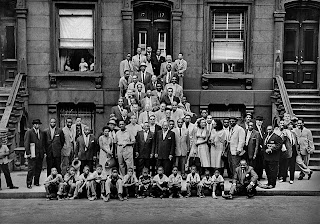