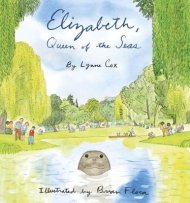 Elizabeth was an elephant seal who loved the waters of the Avon River which flows through Christchurch, New Zealand. At eight feet long and twelve hundred pounds, she was not exactly ladylike, but was so strong and regal that citizens named her after the Queen of England. One particular citizen, a young boy named Michael, connected with her. He walked beside the river on his way to and back from school. He would call out her name and she would snort as if to say hello. All was well until Elizabeth decided that the road was a good place to sunbathe. Her first venture to the warm asphalt caused a motorist to hit a rock and dent a fender. When news spread of this incident, it was decided that she needed to live elsewhere. Elizabeth was taken out to the ocean and a sandy beach full of elephant seals. Undaunted, she marched herself back to Christchurch and the Avon River. Once again, she placed her long body on the road and wreaked havoc on traffic. This time, the authorities took her much further away to another seal colony, but Elizabeth came back to her home place. Thinking the third time was the charm, they took her hundreds of miles away so as to make locals think that they had seen the last of her. Michael searched the waters for months with no sign of his seal friend. Then one day, she appeared with her head bobbing out of the water. This was a seal that knew where she belonged and would not be stopped.

Elizabeth, Queen of the Seas is a charming story about an animal that is determined to keep her home. Even though she is a seal, Elizabeth can teach children about determination and holding on to what you want in your life. Yes, that is a bit of anthropomorphism, but I don't think kids mind. They will enjoy this story and the wonderful illustrations from Brian Floca.

If you want more info about Elizabeth, check out this article from New Zealand: http://www.stuff.co.nz/the-press/news/7464952/Memories-of-Avon-Rivers-sea-elephant