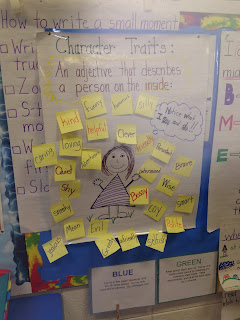 This is a cute poster that my colleague Paula Patterson created. We can add Post-Its as we continue to learn about character.
Posted by Jeff Barger at 6:22 PM 1 comment: 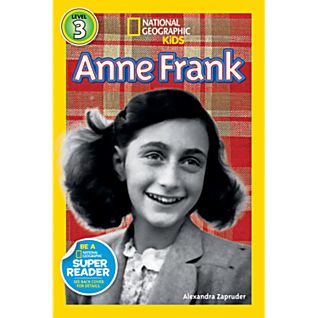 Check out Nonfiction Monday at Booktalking

Our world is not perfect. But we do not stop trying. We study the past to learn from our mistakes. We remember those who were killed in the Holocaust. And we work to make the world better and safer for all of us.

Those words end this informative biography of Anne Frank's tragic life. Author Alexandra Zapruder starts the book with this paragraph:

Can you imagine being punished just for being who you are? Or because you look, think, or feel differently from those around you?

In between these two paragraphs is the story of a young girl who started writing a diary to help her deal with the brutality of the Nazi regime that terrorized Europe and beyond in the 20th century. Most, if not all, of you that read this already are familiar with Anne Frank's life and the diary that she kept while in hiding. So what suggests this particular retelling of her life? The story of Anne Frank, and the background knowledge needed to understand her situation, is told in a straightforward and simple text while still being extremely informative. That is a difficult task for an author. The reason this is valuable is that it makes reading about Anne Frank's life and the Holocaust accessible to students who are struggling readers in middle or high school. With the help of the insightful photographs and text features that you expect from a National Geographic book, readers who are reluctant to read about history would be more inclined to read this book as opposed to a dry textbook. Readers will understand why this is a horrible chapter in history that needs to be remembered. It also challenges us to do what we can to prevent people from being unfairly treated. One extra feature near the end of the book that provided new information for me was the inclusion of six other European young authors who also kept diaries of their experiences during World War II.

Anne Frank could be decoded by a student reading on a third grade level, but I wouldn't recommend handing it to a third grader to read independently. There are some pretty heady concepts working here that need added maturity for the reader to begin to grasp the information properly. I think it is a great text to give to a student in middle or high school who needs to read nonfiction and learn to use text features or read a biography. 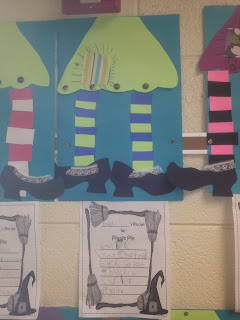 My colleague, Lisa Irby, teaches kindergarten and has many cool ideas. I saw this in the hallway yesterday and had to take a picture. My phone photo is not the greatest, but you can see that Piggie Pie is the inspiration for this craft. What I think is particularly cool about this craft is the geometry involved. Rectangles and circles abound. Check out the lace on the shoes! Below the construction paper is a recipe for Piggie Pie written by her class.

Posted by Jeff Barger at 8:54 PM No comments: 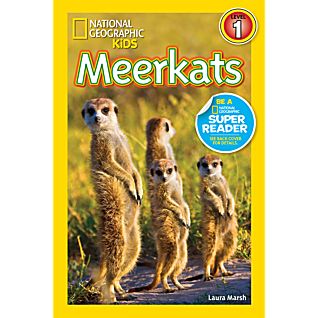 Check out Nonfiction Monday at Abby the Librarian

Q: How does a meerkat stop the DVD from playing?
A: It presses the PAWS button.

Meerkat jokes are one of the features you will find in this engaging informational text. The book starts with perhaps one of the cutest title pages you will ever see. One meerkat is sitting and staring into the distance while another one is standing with his arm around his friend. An introductory chapter teaches young readers that meerkats are part of the mongoose family and live in the deserts of Africa and Asia. The text could be handled by a late first grade or beginning second grade reader without too much trouble. Later chapters include information about habitats and preferred foods. Perhaps the distinguishing feature of meerkats is their dependence on their family or mob. Every member has a job. While part of the group is out hunting, others stay back and babysit. Some meerkats take to the high ground and stand guard in order to watch out for predators. A loud peeping sound is the alert to find a safe spot from predators. Other jobs include teaching and being a feeder. Meerkats pitch in and work together to survive.

Readers will enjoy the photographs of meerkats and learning about this interesting animal.  I like the simplicity of the text and the extra features like vocabulary words and jokes. This is the kind of book that can serve as a mentor text when my second graders start writing informational text. Be sure to investigate the National Geographic Kids feature on meerkats. You will find more facts and video to serve as an extra resource. Check out this cool activity from a Bulgarian website, www.krokotak.com. There is a printable PDF to help create these critters.

Posted by Jeff Barger at 9:48 PM No comments: 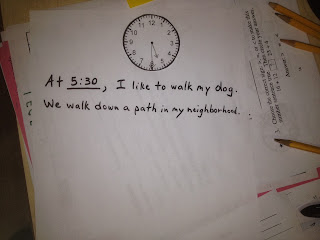 I printed a sheet of nine blank clock faces. I gave each student a stack of white copy paper. On each sheet of white paper, a clock face is glued to the top and clock hands are written on the face. Underneath the clock face, students will write two sentences telling what they would do at that time. Finally, they can add an illustration underneath the sentences. Not fancy, but a fun way to work on telling time.
Posted by Jeff Barger at 9:39 PM No comments: 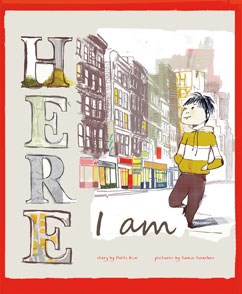 Here I Am
story by Patti Kim; pictures by Sonia Sanchez
2013 (Capstone Books)
Source: Review copy provided by the publisher


In this new wordless book, a young boy and his family move from Asia to a large American city. He stares out the airplane window with a forlorn face. The signs in the airport are just a jumble of letters with no meaning for him. This new place is terribly noisy and busy. His only release is a red seed, from his homeland, that he keeps in his pocket. It reminds him of his old home and its sights and sounds. He goes to school and nothing makes sense. It's all gibberish to him. Much time is spent looking out windows and feeling sorry about his situation. One day, while sitting again at the window, he sees a young girl jumping rope on the sidewalk. He drops his valuable red seed on the girl's head. She picks it up and goes on her way. The boy is forced to leave his apartment and track down the girl. In the process of finding her, he discovers that this new place may not be so bad after all.

This is one of the best books that I have read this year. Here I Am captures the experience of moving to a new country with such heart and warmth, but it is not cloyingly sweet. The illustrations brilliantly show you the cacophony of a new town when you don't know the language and the main character's initial despondency. I will be using this book with two small groups tomorrow to show how we can use illustrations to infer a character's mood. I have students who struggle with learning English, so Here I Am will serve as a welcome connection. Be sure to read the letter in the back of the book from author Patti Kim. It's a hopeful note for students who may be in a similar situation as she was when she was 4 years old and coming to a new country.

Myra at the Gathering Books blog has posted an exceptional essay about Accelerated Reader and her questions about this approach to motivating students to read. If you work in a school using AR, you should read this.
Posted by Jeff Barger at 11:57 AM 2 comments: This is a terrific chart for teaching students about beginning, middle, and end. That would be RL 2.5 in Common Core language. I made a copy of this and have posted it in my room. We're reading Lilly's Purple Plastic Purse this week to work on this skill. I also read the beginnings of Grace for President and Anna Hibiscus to show what you will find in the beginning of story.

Posted by Jeff Barger at 7:37 PM No comments: 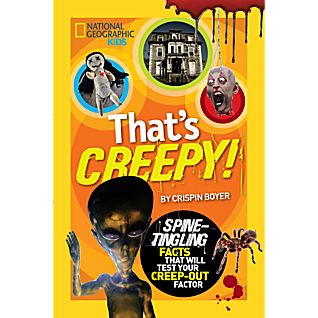 Time to get your creepy on, folks. That's Creepy will provide you with the real life back story of several infamous creeps. The book starts with vampires. My favorite section is titled Original Fangsters. On this page, you learn about two predecessors of Vlad Dracula (aka Vlad the Impaler). Lilith was a Sumerian monster from around 2000 B.C. that preyed upon its victims at night. Lamia was a snake-tailed former girlfriend of Zeus who drank the blood of victims until they perished. I didn't realize these tales had such early origins. There are seven other chapters in this book with subjects like werewolves, unicorns, UFOs, ghosts, and hoaxes. Special Agent Jeeper of the CIA (Creepy Intelligence Agency) will periodically show up to cry "bogus" when a tale lacks reason. Ethel the E.T. is an alien that will share more disturbing facts. This is a book for those students who like the macabre. It's full of historical facts which might attract a student who normally isn't that interested in doing research. I would stick to students in middle grades or above since the subject matter can get pretty gruesome.


300 facts abound in this fun book that will keep the attention of nonfiction fans. Starting off the weirdness is the fact that tomatoes were considered poisonous until the 1800s. Other weird happenings:

I like the format of this book in that you could easily duplicate it with your students. It would be fun to create an animal "weird facts" book in Writer's Workshop for example. Weird but True will be a popular title with your students. 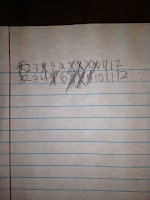 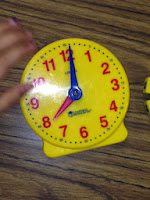 Here is a new game that I invented today. If someone else has already invented this, my apologies to you and email me so I can give you credit. I call this game "The Nearest Hour". Sounds ominous, but it's actually pretty tame. Here are the rules and materials needed:

Rules
1. Each player will write down the numbers 1-12 on a piece of paper.
2. Players will show each other 1 o'clock on their clock face and mark out the number 1 on their paper. This is done at the beginning since you can't roll a 1 with two dice.
3. Players take turns rolling two number cubes. The player will add the sum of the two dice and show the corresponding time on their clock face. Then, the player will mark that number off their list.
4. The player who marks all of their numbers off their list first will win the game.
Alternative rule: Players will mark numbers off one list and the player who marks off the last number wins the game.

Posted by Jeff Barger at 9:04 PM No comments: