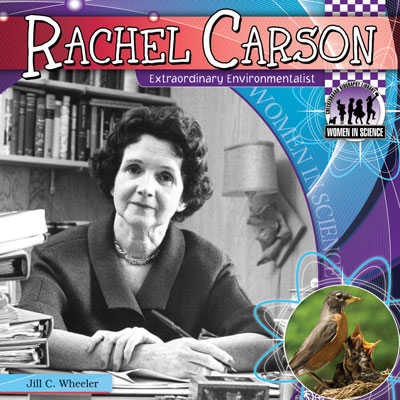 This is the review I should have written for last week's STEM Friday post, but I'm 7 days late and always several dollars short!


As teachers, we talk to our students about trying to make a difference in this world. Not many people in the 20th century made a bigger difference than Rachel Carson. She was a biologist and a journalist whose curiosity led her to explore the effect of pesticides such as DDT. Carson's research showed that these  pesticides were more potent and deadly to animals and humans than originally thought. Published in the New Yorker and later as a book, Silent Spring changed how we viewed these chemicals and sparked many people to reconsider their views on how the environment is treated.

Rachel Carson: Extraordinary Environmentalist covers this part of the biologist's life, but there is much more to be learned about this famous scientist. I was especially struck by the influence of her family. Ms. Carson's mother taught her at an early age about the importance of nature and making sure that it is treated with respect. There are many instances in her life where her parents made sacrifices to support her schooling and she made sacrifices to support her family when they were in financial need. I think this teaches children about determination and tenacity. Rachel Carson went through many hardships in her life, but she continued to press on and feed her desire to learn more about the natural world.