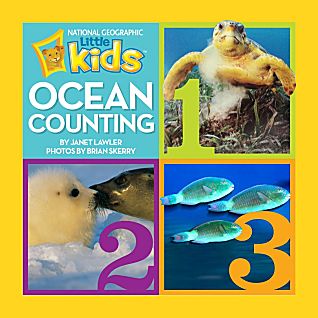 
Janet Lawler and Brian Skerry have teamed up to create a terrific new counting book that features animals that are part of ocean life. Each two page spread has a number and an animal that is the focus of the spread. For the number 3, readers will see three star-eye parrotfish. There is a paragraph of information and an insert with an extra fact about the animal. In the parrotfish paragraph, the author draws two comparisons between this fish and the namesake bird. Among the other nine animals featured are sea otters (photograph of them sleeping!), hammerhead sharks, and adelie penguins. The photographs are spectacular and I love the small amount of text that makes this a candidate for a nonfiction read aloud. Perhaps my favorite section of this book is the back matter. It starts with two pictographs that encourage readers to count forwards and backwards to and from 10. Next, there are ten sections where readers are given more information about each animal. This is a reward for those students who want to learn more. Facts are provided about the home, size, food, predators, and babies of each animal. This is very helpful for those students seeking to write about book about one of these animals. Also included is a map of the world that shows where each photograph was taken. An eleven word glossary finishes out the back matter.

Students will love looking at these photographs and reviewing the facts that come with each animal. This book would be a good nighttime reader since the paragraphs in the main text are not very long. Having students create their own counting books with animal information would be a fun writing activity. Spread out some nonfiction books and have them collect two facts for each animal. For younger writers, you could type out the facts and pass them out. Then they could write the facts and draw a number of the animals. You could do this with plants as well. Instead of counting sheep, perhaps some young readers will be counting ocean animals instead.