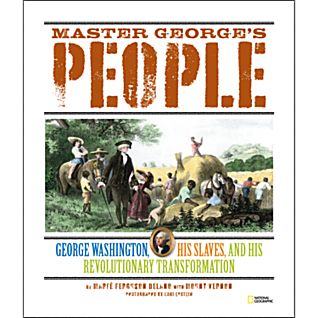 George Washington is seen as a soldier, a gentleman farmer, and a president. One view of the man that has not been written about as much is his position as a slave owner. Master George's People, through the use of Washington's correspondence and other documents, allows us to see how he viewed slavery in general and "his people" as he called them. The young George Washington, as did his peers, treated slaves as property. He was an ambitious plantation owner who wanted to "make a name for himself in Virginia's powerful upper class." Washington didn't question slavery as being wrong and was not above breaking up slave families to serve his purposes. He expected slaves to work from dawn to dusk, six days a week. Slaves were given daily rations, homes, and clothing, but Washington only provided what he thought they needed. Disobeying slaves were punished and runaway slaves were returned to Mount Vernon. It is when George Washington leaves his estate to lead the fight for independence that his views of slavery and African Americans begin to change. He sees black soldiers fighting valiantly alongside white soldiers. His experiences with poet Phillis Wheatley and the slavery opposing Marquis de Lafayette further influence him. He is conflicted, but not enough to free the slaves that work for him. As he neared the end of his life, owning slaves further tormented Washington enough that he freed the slaves that he owned in his last will and testament. The author writes at the end of the book, "By the standards of our own time, it can seem he did too little too late. But considering his time and place, Washington's decision to free his enslaved people was actually quite daring." George Washington was the only slave owning Founding Father to publicly change his mind about slavery and repute it.

Master George's People is a fascinating portrait of the evolving thinking of our first President on the subject of slavery. It sheds light on a little known aspect of his life and on the life of slaves and their owners in the 18th century. Students will want to discuss and debate what they find in the book.