Check out STEM Friday for more science and math links.

What makes a great building? This would be a good essential question for students to ponder. Is it the look? The story behind the building? Maybe the utility of the structure. Ann Kerns makes us think about these things with her book Seven Wonders of Architecture. In the text the following buildings are featured:

Each chapter features background information about the area where the building stands. This is important since some of these buildings stand in somewhat unfamiliar territory for most students. I appreciate learning about the origins of places like Dubai and Taiwan. In addition, you get the stories of the architects of these buildings. There is the heartbroken Shah Jahan who had the Taj Mahal built as a tomb for his wife, Mumtaz Mahal. Gustave Eiffel went against convention in building a tower that was not solid but instead built a wrought iron tower with open walls. Each building presented great challenges that were eventually overcome to create monuments to engineering.

Seven Wonders of Architecture is an opportunity for students to try a different route when choosing a subject for a biography project. It is also interesting to compare how a building is received when it is first built and what the reaction is to it years later. This book could spur discussions on what is the favorite building of your students in their town. They could interview the tenants and learn the history of the building. My favorite building? Perhaps it is Fallingwater, which is a house in western Pennsylvania designed by Frank Lloyd Wright.

Below is a picture I took from the top floor of the Sears Tower in Chicago. 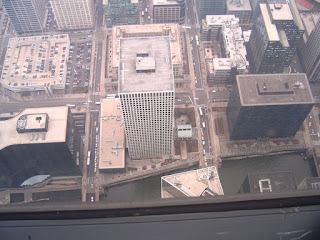