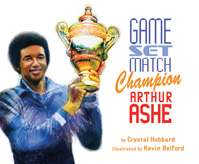 My first memory of Arthur Ashe was his victory over Jimmy Connors to win the 1975 Wimbledon men's singles title. Connors was seeking his second consecutive title and was heavily favored to win. Ashe played a cerebral match to overcome and outwit the younger champion. I remember him as a different kind of athlete who cared about more than just tennis.

When I saw Game, Set, Match, Champion Arthur Ashe, I immediately picked it from the shelf because Arthur Ashe is one of the most important American athletes of the 20th century. I've probably said this before, but I think you can't overestimate how much you can learn about our history (especially in the last century) by reading about sports. Ashe grew up on the segregated tennis courts of Richmond, Virginia, but it did not keep him from becoming a champion. Two thoughts came to me as I read Crystal Hubbard's terrific biography of his life. As with most champions, several people played an important part in Arthur Ashe's life and set him on a path to win 3 Grand Slam singles titles. Without one of those people, he may not have reached the heights that he did. Author Hubbard takes great care in highlighting the people who guided Arthur. My second thought was of Arthur Ashe's love of representing his country in Davis Cup matches. It's illustrated by illustrator Kevin Belford's cover portrait of Ashe proudly wearing his country's uniform while hoisting the Wimbledon trophy.

Click on this link to see 3 minutes of Arthur Ashe's artistry on the tennis court.

Other reviews:
Rhapsody in Books