You Are What You Eat (And Other Mealtime Hazards) 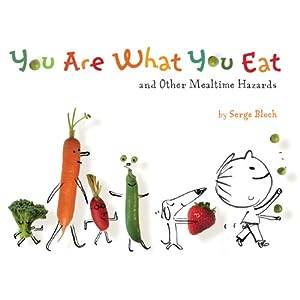 You Are What You Eat (And Other Mealtime Hazards)
written and illustrated by Serge Bloch
(Sterling Publishing) 2010
Source: Mebane Public Library

The unnamed protagonist of You Are What You Eat is a picky eater. He would eat macaroni for every meal if given the choice. His parents would like to see him eat a greater variety of food, but they don't seem overly concerned. His mother still says he is the "apple of her eye." When his best friend Oliver invites him over for dinner, he is a bit worried. Oliver's mother is a bit of a health nut so he's not sure what he will eat or if he will eat. Despite the teasing of his sister and with the support of his parents, our gastronomic guy finds that if you're willing to broaden your eating horizons you will be surprised by what you might like.

Each page of You Are What You Eat contains an idiomatic expression that ties neatly into the story. This book is like a foodie version of Ira Sleeps Over where a main character learns something about himself after a visit to a friend's house. If you are looking for a read aloud to kick off a unit on figurative language, this would be a great choice. The playful illustrations are a combination of pencil drawings and photographs of inanimate objects. I can see a class creating individual booklets of idiomatic expressions based on this book.
Posted by Jeff Barger at 9:45 PM