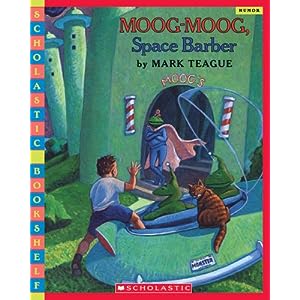 Normally kidlit blogs (including this one) focus on books that have been published in the last few months or will be published in the near future. I thought it would be interesting to take one day a week and highlight a book I really like that is several years old, but still available. Hence the birth of Throwback Thursday. If you have any comments on the idea, let me know.


Moog-Moog Space Barber was a book that I used to read to students on the first day of school. In the book, Elmo Freem is nervous because it is the night before school starts and he is the recipient of a bad "back to school" haircut. He decides to watch a late night sci-fi movie to avoid thinking about school and his haircut. While he is watching the movie, he hears a noise in the kitchen. Two aliens are raiding the refrigerator, but they seem quite friendly. Initially, they mistake Elmo for an alien since he has on a long cap to cover his haircut. Once the aliens see his hair, they agree that it is indeed a bad haircut, but they also have a solution. The aliens transport Elmo and his cat Leon to their home planet Moogie to meet Moog-Moog, the greatest barber in the universe.

Moog-Moog Space Barber might seem like an odd choice for a first day of school read-aloud, but students are able to connect to being nervous before going to school and with having received a bad haircut. The humor might be odd to some, but my students thought it was pretty funny.
Posted by Jeff Barger at 9:07 AM

Email ThisBlogThis!Share to TwitterShare to FacebookShare to Pinterest
Labels: 3-5, beginning of the year, connections, humor, K-2