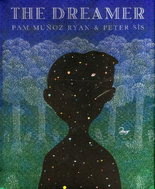 The Dreamer
written by Pam Munoz Ryan; drawings by Peter Sis
(Scholastic Press) 2010
Source: Mebane Public Library
Eight year old Neftali Reyes is a sickly child who loves to read and dream. This infuriates his railroad foreman father Jose, who believes Neftali needs to roughhouse with the neighborhood boys instead of daydreaming and reading.  At the core of this story is the struggle between what Neftali wants to do and what his father thinks he should do. Neftali wants to read, write, and take in the beauty of the Chilean world in which he lives. Jose wants him to excel at math and become a doctor or dentist. He is ashamed of Neftali and does little to hide his disgust. Despite this struggle, Neftali continues to write and grows into becoming the poet Pablo Neruda, a name he takes to spare his father the indignity he would feel for having a poet for a son.


Pam Munoz Ryan's storytelling and Peter Sis's poignant illustrations combine to create one of the best books I've read in 2010. This fictionalized biography of poet Pablo Neruda's childhood touches many emotions. I really cared about Neftali and rooted for him to overcome the obstacles that come his way. His triumphs are tinged with sadness and yet, like his uncle Orlando, he is that ember that keeps burning instead of being doused by the oppressiveness of others. The Dreamer will be one of the books in the conversation for the 2011 Newbery Award.
Posted by Jeff Barger at 10:41 PM