Superman: The Story of the Man of Steel 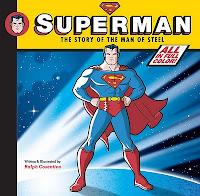 Superman: The Story of the Man of Steel written and illustrated by
Ralph Cosentino
(Viking Kids') 2010
Source: Mebane Public Library

I work with a first grader who loves superheroes.  I need to read Ralph Cosentino's Superman: The Story of the Man of Steel to him. Cosentino has served a need that I didn't think about until I read his book. We have tons of primary school children who love superheroes and play with action figures, but really don't know the background of their beloved characters. This picture book starts from the beginning where Superman's real parents realize that the planet Krypton is about to explode. There is just enough time for Superman's dad to build a small rocket ship for his infant son to travel to Earth. Upon his arrival, Kal-El (Superman's real name. Didn't know that!) is found by Smallville residents Jonathan and Martha Kent, who teach him right from wrong and to use his superpowers for good. The book goes on to tell about Superman's adult life and the villains he faces.

Superman: The Story of the Man of Steel would be a great text to use for exploring character with primary students. Discussion questions could include "Why does Superman have special super powers?" or "Why is Superman a good superhero?" It would also be interesting to check the background knowledge of students about Superman before reading the book and see what they learned after reading the book.
Posted by Jeff Barger at 1:58 PM