Sit-In: How Four Friends Stood Up By Sitting Down 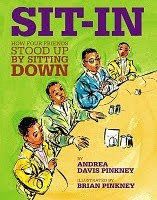 On February 1, 1960, four friends take a seat at the Woolworth's lunch counter in Greensboro, NC. "Their order was simple. A doughnut and coffee, with cream on the side." There were other things not on the menu that these North Carolina A&T students wanted as well.  Justice. Integration. Civil rights.  David, Joseph, Franklin, and Ezell took a courageous step by simply sitting.  This led to others staging similar peaceful sit-ins across the South to protest the injustice of segregation. Other protests soon followed at "libraries, buses, parks, and pools." Students withstood attempts at intimidation and help lead to the changing of popular opinion and the eventual passage of the Civil Rights Act in 1964.

Andrea Davis Pinkney's text is a terrific account of an important event in American history. Sit-In flows beautifully with quotes from Dr. Martin Luther King woven in.  This is one of the best books you could use for teaching sentence structure. Davis Pinkney varies the length of the sentences like a smart veteran pitcher varies fastballs, curves, and changeups on the mound . The section of the book with a recipe for integration is especially brilliant. Brian Pinkney's poignant watercolor and India ink artwork effectively reflects the peaceful determination of these students. Add this book to your nonfiction collection and mentor texts for teaching writing.
Posted by Jeff Barger at 8:16 PM