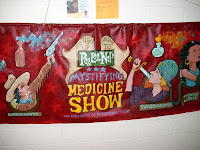 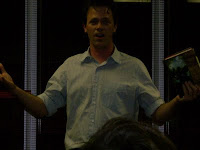 John Bemis, author of The Nine Pound Hammer, came to our school last night for a book signing. He read selections, sang songs, and invited audience members to help retell the story of John Henry. If you have not read this book, you are missing out. It is truly an original novel with American mythology being the inspiration for the story. John announced that the second book in the Clockwork Dark series, The Wolf Tree, will be released in August. A good time was had by all.
Posted by Jeff Barger at 11:21 PM